We had small elective seminars (discussion groups) that were a new feature of the summer session and were very well received with the following topics: Win at the Initial Appearance, taught by Andrew Mishlove and Pat Maher; Suppression Motions: Winning it All Before Trial, taught by Jim Nesci and Steve Oberman, Leonard Stamm and Andy Alpert, Andrew Mishlove and Pat Maher, Don Ramsell and Michelle Behan, and, Mike Hawkins and George Flowers;  Getting What You Want-Creative Approaches to Obtaining Discovery, taught by Bell Island and Lauren Stuckert; How to Use Social Media Effectively and Ethically, taught by Bill Kirk and Brad Williams; Federal DUIs: Reinventing the Wheel? by Leonard Stamm and Andy Alpert; Don’t Let Your Military Client Go Down with the Ship by John Hunsucker and John Webb; Picking the Winning Jury by John Hunsucker and John Webb, Mimi Coffey and Ryan Russman, and Paul Burglin and Lynn Gorelick; Preparing for Plan B, Sentencing in Serious Cases, taught by Mike Hawkins and George Flowers; Follicles, IIDs, ETG and SCRAM: The Hairs, Airs and Other Snares of DUI, taught by Doug Murphy and Richard Middlebrook; Just Say NO to Losing Your Client’s Commercial or Professional License, taught by Virginia Landry and Steven Epstein; Turning the Tide with Treatment, taught by Paul Burglin and Lynn Gorelick; Using Technology to Win Your Case, taught by Joe St. Louis and Lawrence Koplow; Managing a Practice from the Stone Age to the Digital Age in 10 Easy Steps, taught by Bruce Edge and Matt Dodd; Writing Winning Appeals, taught by Don Ramsell and Michelle Behan.

Our Keynote Address was presented by Dean Strang and Jerry Buting. two Wisconsin lawyers whose defense of Steven Avery, a DNA exoneree who served 18 years in prison for a rape he did not commit only to be convicted of murder and sentenced to life a few years later, is featured in the Netflix production, Making a Murderer. 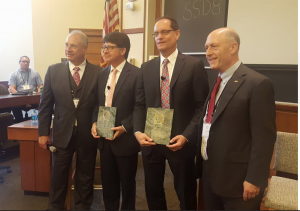