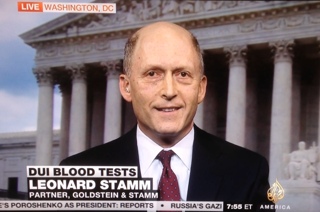 JHS: Drivers stopped on suspicion of driving under the influence in Tennessee are sometimes forced to submit to a blood test. The State allows officers to demand a driver give blood if they refused to take a breathalyzer test. Tennessee is not the only place where this is being done. Wyoming and some parts of Atlanta have similar laws on the books. And Georgia is considering allowing it statewide. It’s a controversial practice that critics say is a violation of a person’s right to privacy. Joining us to discuss the legal implications is Leonard Stamm, a criminal defense attorney, and executive committee member with the National College for DUI Defense. He’s in Washington, D.C. this morning. Mr. Stamm, how can law enforcement pull people over suspected of DUI and demand a blood sample. Is that not a violation of a person’s Fourth Amendment right against unreasonable searches and seizures?

LRS: Well last year the Supreme Court decided the case of Missouri versus McNeely, and the Supreme Court held that before police can take blood from somebody that unless there’s some kind of emergency that impedes their ability to get a warrant they have to call a judge and get a warrant before they can stick a needle into and pierce somebody’s skin to get a blood sample.

JHS: Well in Tennessee, if a driver refuses a breathalyzer or a blood test, police officers can get a judge to issue the warrant and force the person to comply. Can a suspect be physically restrained and forced to give blood?

LRS: Well yes they can but it has to be done in a medically appropriate manner. So I think that if the police officer is holding somebody down on the side of the road and poking them with a needle, or has been documented in other news stories, on the floor of the jail or put in a chair and have a hood put over their head, I don’t think courts will approve those kinds of procedures. But if it’s done in a medically appropriate manner – what the Constitution requires, what the Fourth Amendment requires is that before police do it they just can’t poke somebody without getting a judge to approve it first so if a judge approves it, then the second question is, the first question is: is there probable cause for the search. If the judge approves it, there’s going to be a requirement that they perform the test in a medically appropriate manner.

JHS: So am I hearing you say that the only way this can be challenged in court is if a judge doesn’t approve it first?

LRS: Well that’s certainly one way to challenge it. There are lots of ways to challenge a blood test. Certainly, once they get the sample, if it’s over the legal limit, there are lots of different arguments that can be made to challenge the reliability and accuracy of the test result itself – whether it’s a reliable number.

JHS: What’s the difference between a blood test and a breathalyzer? Are there any advantages to one over the other?

LRS: Well certainly from the police point of view, the breathalyzer is an easier test to administer. It doesn’t require them to take somebody to a hospital and they can do it in the police station, and all they have to do is blow into a tube. But they also have to be properly observed for 20 minutes before they submit to the breath test, if they belch or regurgitate there can be contamination of the result. It has to be interpreted, converted into a blood level. And what some states are doing is that because of the problems with the reliability of breath testing they’re going to blood testing. But blood testing has its own set of unique problems. That you know, there’s no panacea here for the State.

JHS: Leonard Stamm, criminal defense attorney and Executive Committee member with the National College for DUI Defense, joining us from Washington, D.C. Thank you so much this morning.

If you are facing criminal or traffic charges in Maryland state or
federal court, call Leonard R. Stamm of Goldstein
& Stamm, P.A. at 301-345-0122 for a free consultation.