On this day 35 years ago, September 4, 1984, I began the practice of law.  I walked into court with my mentor and friend, the late great Alan Goldstein, to watch him litigate motions in a conspiracy to commit murder case.  I had just returned from my honeymoon in Greece the day before.  And while I was in that jet-lagged state, Alan introduced me.

Your honor, I would like to introduce Mr. Leonard Stamm.  You have known him as he clerked across the hall last year.  Now he is my associate.  And he is going to argue today’s motions.

With that, Alan sat down.  And he, and the judge, and the prosecutor looked at me and said “Get up!”  I, of course, was completely unprepared, and shocked.  They all looked at me and again said “Get up” again.  As I slowly started to stand up, they all started laughing.  And with that began my practice of law.

35 years later, I’m still at it and going strong!  Thanks to the many people that made this possible.

Author: All updates since 2013 to Maryland Evidence: State and Federal by Professor Lynn McLain 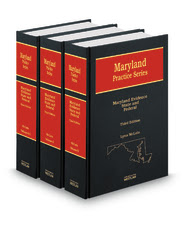